The following script explains how to create Debian GNU/Linux packages for Ceph from a clone of the sources.

END_OF_DOCUMENT_TOKEN_TO_BE_REPLACED 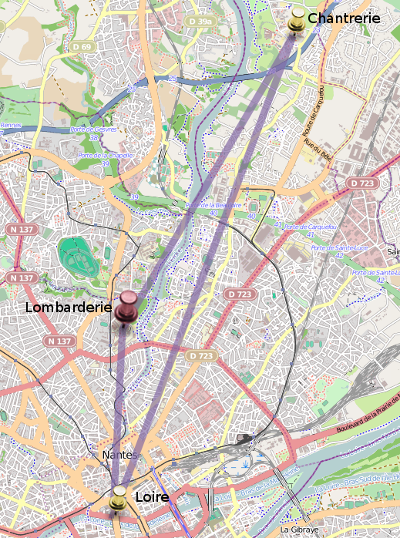 The Université de Nantes started using Ceph for backups early 2012, before the Bobtail was released or Inktank founded. The IRTS department, under the lead of Yann Dupont, created a twelve nodes Ceph cluster to store backups. It contains the data generated by 35,000 students and 4,500 employees totaling 100 millions inodes and 25TB of data (out of 40TB). The hardware is spread accross three geographical locations ( Loire, Chantrerie and Lombarderie ) and Ceph is configured to keep working transparently even when one of them is down. The backup pool has two replicas and the crushmap states that each must be stored in a different geographical location. For instance, when Lombarderie is unreachable, which happened this week because of a planned power outage combined with an unplanned UPS failure, Ceph keeps serving the objects from the replicas located in Loire and Chantrerie.
END_OF_DOCUMENT_TOKEN_TO_BE_REPLACED

Efficient algorithms and programs for the analysis of the ever-growing amount of biological sequence data are strongly needed in the genomics era. The pace at which new data and methodologies are generated calls for the use of pre-existing, optimized – yet extensible – code, typically distributed as libraries or packages. This motivated the Bio++ project, aiming at developing a set of C++ libraries for sequence analysis, phylogenetics, population genetics and molecular evolution. The main attractiveness of Bio++ is the extensibility and reusability of its components through its object-oriented design, without compromising on the computer-efficiency of the underlying methods. We present here the second major release of the libraries, which provides an extended set of classes and methods. These extensions notably provide built-in access to sequence databases and new data structures for handling and manipulating sequences from the omics era, such as multiple genome alignments and sequencing reads libraries. More complex models of sequence evolution, such as mixture models and generic n-tuples alphabets, are also included.
The article was published May 21st, 2013. Read the full article : Bio++: efficient, extensible libraries and tools for computational molecular evolution

A five years old hardware is being decommissioned and hosts fourteen vservers on a Debian GNU/Linux lenny running a 2.6.26-2-vserver-686-bigmem linux kernel. The April non profit relies on these services (mediawiki, pad, mumble, etc. ) for the benefit of its 5,000 members and many working groups. Instead of migrating each vserver individually to an OpenStack instance, it was decided that the vserver host would be copied over to an OpenStack instance.
The old hardware has 8GB of RAM, 150GB disk and a dual Xeon totaling 8 cores. The munin statistics show that no additional memory is needed, the disk is half full and an average of one core is used at all times. A 8GB RAM, 150GB disk and dual core openstack instance is prepared. The instance will be booted from a 150GB volume placed on the same hardware to get maximum disk I/O speed.
After the volume is created, it is mounted from the OpenStack node and the disk of the old machine is rsync’ed to it. It is then booted after modifying a few files such as fstab. The OpenStack node is in the same rack and the same switch as the old hardware. The IP is removed from the interface of the old hardware and it is bound to the OpenStack instance. Because it is running on nova-network with multi-host activated, it is bound to the interface of the OpenStack node which can take over immediately. The public interface of the node is set as an ARP proxy to advertise the bridge where the instance is connected. The security group of the instance are disabled ( by opening all protocols and ports ) because a firewall is running in the instance.
END_OF_DOCUMENT_TOKEN_TO_BE_REPLACED

The host bm0002.the.re becomes unavailable because of a partial disk failure on an Essex based OpenStack cluster using LVM based volumes and multi-host nova-network. The host had daily backups using rsync / and each LV was copied and compressed. Although the disk is failing badly, the host is not down and some reads can still be done. The nova services are shutdown, the host disabled using nova-manage and an attempt is made to recover from partially damaged disks and LV, when it leads to better results than reverting to yesterday’s backup.
END_OF_DOCUMENT_TOKEN_TO_BE_REPLACED

A single machine is installed with Debian GNU/Linux OpenStack Folsom. Four instances are created and it turns out that nova-network is configured with the wrong public interface. It can be fixed without shutting down the instance:

it can be fixed in the /etc/nova/nova.conf configuration file at the line:

The incorrect VLAN interface is manually deleted and nova-network can be restarted. The instance is then resumed with

and nova-network will automatically re-create the VLAN interface.
END_OF_DOCUMENT_TOKEN_TO_BE_REPLACED

Installing and testing OpenStack Folsom on a virgin Debian GNU/Linux wheezy takes less than one hour. A set of packages is archived to make sure it keeps working. After checking the pre-requisites such as a public and private interface, the packages are installed and debconf questions answered as instructed.
The networks must then be created with

END_OF_DOCUMENT_TOKEN_TO_BE_REPLACED

When the OpenVPN client is back, the cache needs to be flushed to prevent temporary incorrect routing.

END_OF_DOCUMENT_TOKEN_TO_BE_REPLACED

An integration test is run by jenkins within an OpenStack tenant. It checks that the backuppc puppet module is installed

A full backup is run

and a nagios plugin asserts its status is monitored

END_OF_DOCUMENT_TOKEN_TO_BE_REPLACED

The April infrastructure uses puppet manifests stored in a git repository. On each commit, a jenkins job is run and it performs realistic tests in a dedicated OpenStack tenant.

If the test is successfull, jenkins pushes the commit to the production branch. The production machines can then pull from it: