Starting in August 2019, MIT was being put on the spot for accepting money from Jeffrey Epstein and accusations against the late Marvin Minsky for having sex with one of his victims resurfaced. In a call for protest, someone even wrote that Marvin Minsky assaulted her. In reaction Richard Stallman replied in an email that “the word “assaulting” presumes that [Marvin Minsky] applied force or violence, in some unspecified way, but the article itself says no such thing”. The rise of the “cancel culture” makes it very hazardous to publicly say or write anything regarding sexism, prostitution or racism. Despite this, Richard Stallman has published a number of blog entries on those topics over the years, ignoring people urging him to stop or become a target. But this time he caught the attention of someone.

In response, Richard Stallman commented on his blog: “headlines say that I defended Epstein. Nothing could be further from the truth. I’ve called him a “serial rapist”, and said he deserved to be imprisoned.” As for the label on Richard Stallman office door, it was added by an unknown person, over a decade ago. In a documentary shot in 2017/2018, it only reads “Richard Stallman: Knight for Justice” (at 6:22) because Richard Stallman removed the ending: (also: hot ladies). The content and the tone of Selam G.’s article is archetypal of the cancel culture and she was joined by people sharing the same faith to demand the resignation of Richard Stallman.

Any effort to establish the truth was a loss of time: Richard Stallman participating in a discussion about rape and prostitution was blasphemy. He was not attacked for what he wrote, he was attacked for writing on a forbidden topic. Another similar and well documented instance is what happened to Bret W. in 2017 at the Evergreen College when he wrote “one’s right to speak –or to be– must never be based on skin color” in an email. In both cases there were many witness who did not intervene for fear of being the next target. I also stayed silent and horrified while Richard Stallman was shamed publicly. I wanted to believe it would blow over after a few days. I trusted the Free Software community to be rational and eventually disregard this episode. I was sorely mistaken.

It all happened very quickly but the roots of Richard Stallman’s dispute with other members of the Free Software community are deep. Software Freedom Conservancy states that “when considered with other reprehensible comments [Richard Stallman] has published over the years, these incidents form a pattern of behavior that is incompatible with the goals of the free software movement” and Neil McGovern wrote something similar. Although they did not reference any specific event, there are some publicly available records of past disputes. For instance, in September 2018, Richard Stallman wrote a blog entry very similar to the defense of Marvin Minsky. He rewrote it in the following weeks because, in his own words: “some people reading earlier versions of this note seem to have got the idea that I condone enslavement of prostitutes”.

I can only assume the respected members of the Free Software community who leveraged the cancel culture and tabloid journalism felt justified because of years of frustrating disputes with Richard Stallman. But they made a terrible mistake. Richard Stallman was unjustly and severely punished. He no longer has a position at the FSF, which he founded 34 years ago, he also lost his position at MIT, his scheduled talks could be canceled and he lost his home.

History will remember that in 2019 Richard Stallman took a major hit from the cancel culture and tabloid journalists. And also that respected members of the Free Software community endorsed the cancel culture and tabloid journalists. They sent an ominous message to all their opponents: we fight dirty. They negated the benefit of dialog, any sense of rational thinking and threw away years of debate with Richard Stallman. Leveraging someone who had no clue about the past disputes to get rid of their opponent proved to be much more efficient. We should now expect that some Free Software activists will use the cancel culture as a mean to an end. But what they should do instead is to ignore the furor, wait until it passes and resume a discussion based on truth and logic. It takes longer but it is the only way to build a safe and inclusive community.

The laptop was installed with Ubuntu 16.04 about two years ago and it was assumed to:

Using dumpe2fs on the second partition the actual size of the partition is displayed, for instance:

The signature of the third partition gives a hint regarding its content. If it is crypto_LUKS, it can be open with cryptsetup luksOpen /dev/nvme0n1p3 root and the device will show under /dev/mapper.

Today I permanently deleted the GitHub account that was in my name. I used it to contribute to Free Software projects that only use this proprietary platform. I started using GitHub a few years ago and constantly tried (and failed) to convince projects to self-host using Free Software instead. As more and more Free Software projects I care about moved to GitHub, I ended up using it daily and it made me sad.

The recent acquisition of GitHub by Microsoft turned it into a service that belongs to a company that is actively working against the Free Software movement by:

By using Microsoft services daily, I would also implicitly support them, even if indirectly. I feel better knowing I no longer depend on Microsoft in any way.

The sample Nextcloud app is generated with restrictions that won’t allow it to run on version 13 or above. This can be fixed by updating apps/foobar/appinfo/info.xml with:

The Docker test container can be modified to run on /opt/nextcloud/server, a clone of the Nextcloud server including the generated app.

The phpunit-5.7 script is then installed with: 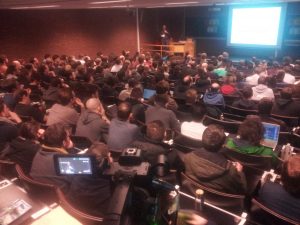 Only this year did I fully understand what motivates so many people to devote their free time to making FOSDEM a success, year after year. As surprising as it sounds, organizing the privacy devroom and standing at the booth was better than just visiting, chatting and attending talks. A big part of that good feeling certainly comes from the excellent organization. Accidents happened, of course, but they were resolved quickly. And ancient Free Software was used with clunky interfaces but nothing got in the way and people used to it help the newcomers. As a Free Software developer, this sets a fine example of the feeling we would like to provide to every contributor of our code base. When participating is more enjoyable than passively using, we’re one step closer to contributopia.

END_OF_DOCUMENT_TOKEN_TO_BE_REPLACED

The git-log -L option traces the evolution of the line range given by “<start>,<end>” and it is not really convenient to use from the command line. Fortunately when the magit-file-mode is active in an emacs buffer, you can select a region and use C-c M-g l to show which commits modified it. 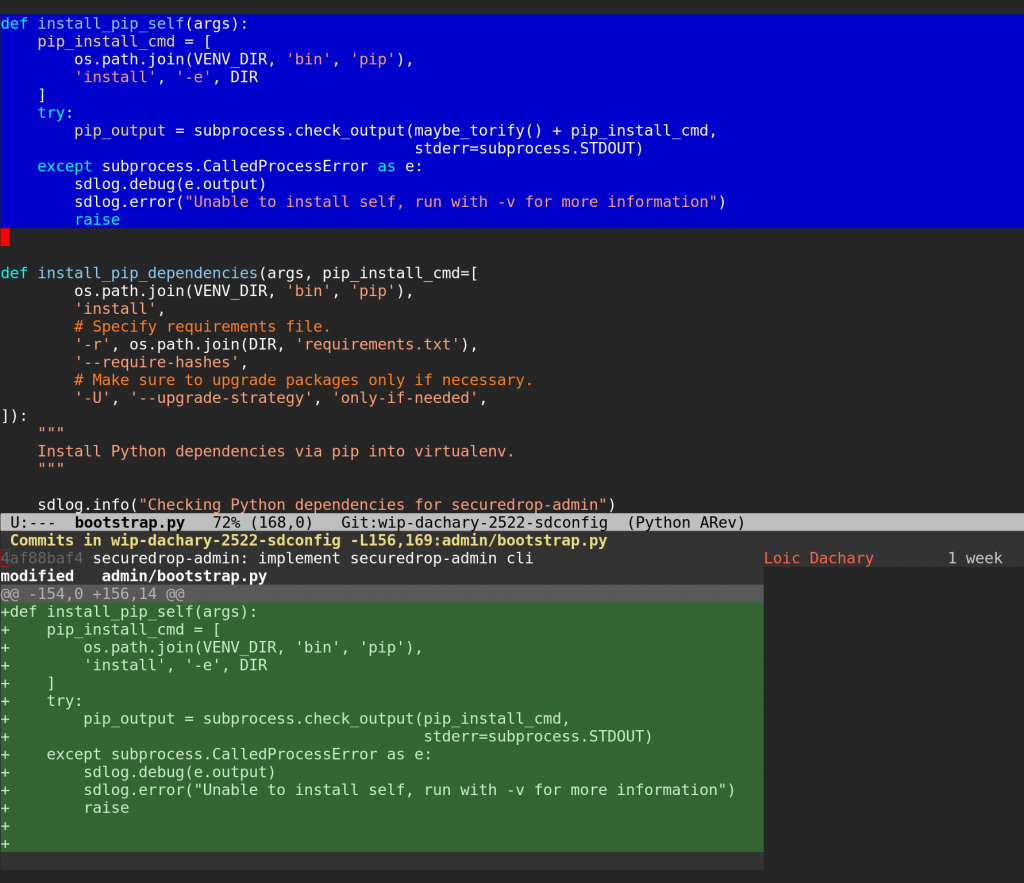 Using a mobile anonymously with encrypted messages and voice is challenging. With Signal text and voice are encrypted but it sends your contacts to Signal which makes me uncomfortable. With Orfox you can browse the web without revealing your IP address but the GSM module tracks your location.

With a small budget you can however buy a second hand mobile and dedicate it to anonymous communications, as long as you remove its battery when you’re not in a public place. You do not leak your contacts to Signal and the GSM module tracks a SIM card that is not associated with you. Here is a detailed description of the preparation of an anonymous phone I did today. This is not rocket science and I’m sure lots of people already know all of that. But I did not find a HOWTO and it took me some time to figure it out.

END_OF_DOCUMENT_TOKEN_TO_BE_REPLACED

can be notified 12 minutes before with libnotify

by adding the following to the .emacs:

END_OF_DOCUMENT_TOKEN_TO_BE_REPLACED

Assuming the FQDN of the machine is download.securedrop.club and the person responsible can be reached at admin@securedrop.cub, create the docker-compose.yml with:

vagrant is the default virtualization development environment for SecureDrop. When starting with a new Debian GNU/Linux 9, installing the dependencies to get vagrant to run with the libvirt provider instead of the default virtualbox can be done as follows:

The current user (debian) must belong to some groups to get permission to run accelerated (assuming intel) kernel virtualization:

To make it the default for the current user

It should now be possible to start the SecureDrop development virtual machine with: