The CRUSH function maps Ceph placement groups (PGs) and objects to OSDs. It is used extensively in Ceph clients and daemons as well as in the Linux kernel modules and its CPU cost should be reduced to the minimum.

It is common to define the Ceph CRUSH map so that PGs use OSDs on different hosts. The hierarchy can be as simple as 100 hosts, each containing 7 OSDs. When determining which OSDs belong to a given PG, in this scenario the CRUSH function will hash each of the 100 hosts to the PG, compare the results, and select the OSDs that score the highest. That is 100 + 7 calls to the hash function.

If the hierarchy is modified to have 20 racks, each containing 5 hosts with 7 OSDs per host, we only have 20 + 5 + 7 calls to the hash function. The first 20 calls are to select the rack, the next 5 to select the host in the rack and the last 7 to select the OSD within the host.

In other words, this hierarchical subdivision of the CRUSH map reduces the number of calls to the hash function from 107 to 32. It does not have any influence on how the PGs are mapped to OSDs but it saves CPU.

When creating a new Ceph pool, deciding for the number of PG requires some thinking to ensure there are a few hundred PGs per OSD. The distribution can be verified with crush analyze as follows:

Increasing the number of PGs is not a practical solution because having more than a few hundred PGs per OSD requires too much CPU and RAM. Knowing that device0 will be the first OSD to fill up, reweight-by-utilization should be used when it is too full.
END_OF_DOCUMENT_TOKEN_TO_BE_REPLACED

After a crushmap is changed (e.g. addition/removal of devices, modification of weights or tunables), objects may move from one device to another. The crush compare command can be used to show what would happen for a given rule and replication count. In the following example, two new OSDs are added to the crushmap, causing 22% of the objects to move from the existing OSDs to the new ones.

The crush compare command can also show the impact of a change in one or more “tunables”, such as setting chooseleaf_stable to 1.

In the following example some columns were removed for brevity and replaced with dots. It shows that 33% of the objects will move after chooseleaf_stable is changed from 0 to 1. Each device will receive and send more than 1% and less than 3% of these objects.

END_OF_DOCUMENT_TOKEN_TO_BE_REPLACED

But running a simulation on a crushmap with four 4TB disks and one 1TB disk, shows something different:

This variation is not new but there was no way to conveniently show it from the crushmap. It can now be displayed with crush analyze command. For instance:

By monitoring disk usage on g9 and adding more disk space to the cluster when the disks on g9 reach a reasonable threshold (like 85% or 90%), one can ensure that the cluster will never fill up, since it is known that g9 will always be the first node to become overfull. Another possibility is to run the ceph osd reweight-by-utilization command from time to time and try to even the distribution.
END_OF_DOCUMENT_TOKEN_TO_BE_REPLACED

END_OF_DOCUMENT_TOKEN_TO_BE_REPLACED

The Ceph integration tests can be run on ARMv8 (aka arm64 or aarch64) OpenStack instances on CloudLab or Runabove.

When logged in CloudLab an OpenStack cluster suitable for teuthology must be created. To start an experiment

to select the OpenStackTeuthology profile

the description of the profile contains an example credential file (i.e. openrc.sh) that can be copy/pasted on the local machine 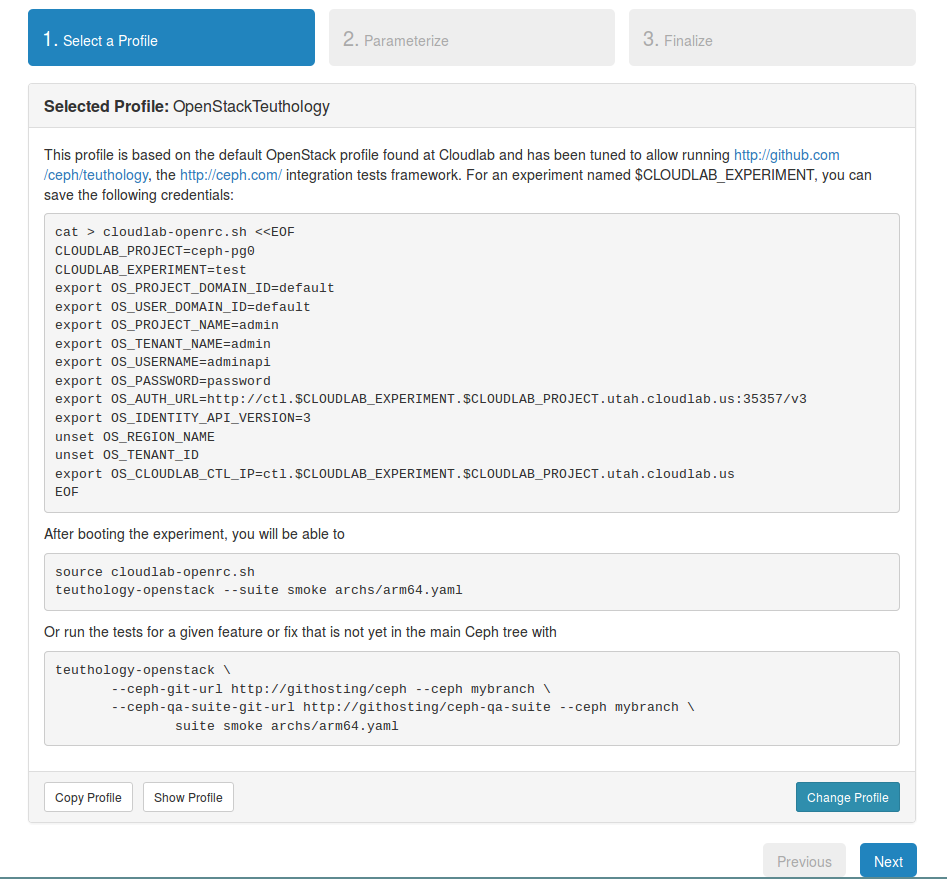 in the last step, choose a name for the experiment. The openrc.sh file must be modified to reflect the chosen name because it shows in the URL of the authentication service. If a new experiment by the same name is run a month later, the same openrc.sh file can be used.

the page is then updated to show the progress of the provisionning. Note that it takes about 15 minutes for it to complete: even when the page says the experiment is up, the OpenStack setup is still going on and need a few more minutes.

Finally click on Profile instructions to display the link to the horizon dashboard and the password of the admin user (i.e. configuring OpenStack inside your experiment, you’ll be able to visit the OpenStack Dashboard WWW interface (approx. 5-15 minutes). Your OpenStack admin and instance VM password is randomly-generated by Cloudlab, and it is: 0905d783e7e7 .). 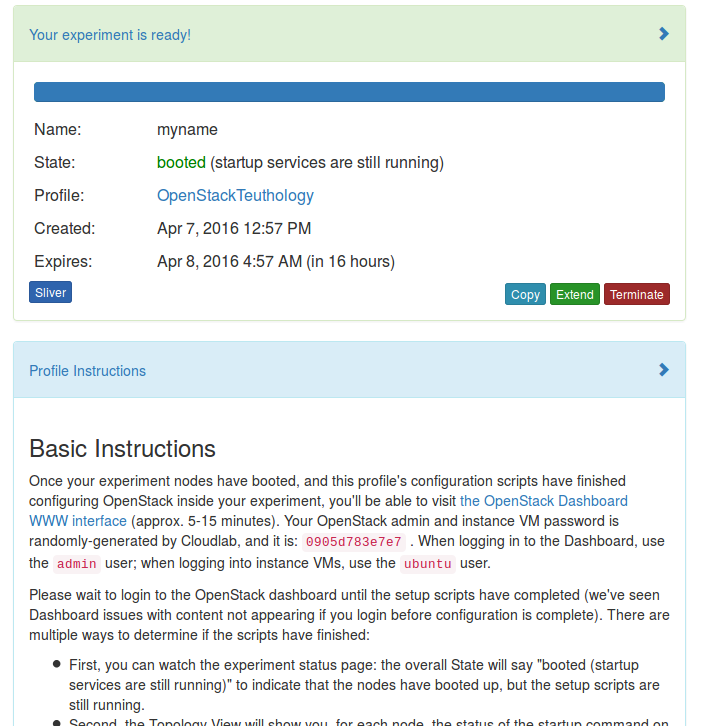 When the cluster is created, running the smoke integration tests for rados on jewel can be done with ceph-workbench

assuming the openrc.sh file has been set in ~/.ceph-workbench/openrc.sh. When the command returns, it displays the URL of the web interface

And when the test completes successfully it will show in green. Otherwise the logs of the failed tests can be downloaded and analyzed.

END_OF_DOCUMENT_TOKEN_TO_BE_REPLACED

The githubpy python library provides a thin layer on top of the GitHub V3 API, which is convenient because the official GitHub documentation can be used. The undocumented behavior of GitHub is outside of the scope of this library and needs to be addressed by the caller.

For instance creating a repository is asynchronous and checking for its existence may fail. Something similar to the following function should be used to wait until it exists:

Another example is merging a pull request. It sometimes fails (503, cannot be merged error) although it succeeds in the background. To cope with that, the state of the pull request should be checked immediately after the merge failed. It can either be merged or closed (although the GitHub web interface shows it as merged). The following function can be used to cope with that behavior:

These two examples have been implemented as part of the ceph-workbench integration tests. The behavior described above can be reproduced by running the test in a loop during a few hours.

When a teuthology integration test for Ceph fails, the results are analyzed to find the source of the problem. For instance the upgrade suite: pool_create failed with error -4 EINTR issue was reported early October 2015, with multiple integration job failures.
The first step is to look into the teuthology log which revealed that pools could not be created.

The 4 stands for EINTR. The paddles database is used by teuthology to store test results and can be queried via HTTP. For instance:

shows which successful jobs the upgrade:firefly-hammer-x suites run against the infernalis branch (the first jq expression) were involved in a parallel test (that is the name of a subdirectory of the suite). This was not sufficient to figure out the root cause of the problem because:

With the teuthology logs in the /a directory (it’s actually a 100TB CephFS mount half full), the following shell snippet can be used to find the upgrade tests that failed with the error -4 message in the logs.

It looks for all upgrade runs, back to July 2015. shyaml is used to query the branch from the job configuration and only keep those targeting hammer. If the job failed (according to the success value found in the summary file), the error is looked up in the teuthology.log file. The first failed job is found early september:

It happened on a regular basis after that date but was only reported early October. The commits merged in the hammer branch around that time are displayed with:

It can be copy pasted in redmine issue. It turns out that a pull request merged September 6th was responsible for the failure.

When a teuthology jobs install Ceph, it uses packages created by gitbuilder. These packages are built every time a branch is pushed to the official repository.

Contributors who do not have write access to the official repository, can either ask a developer with access to push a branch for them or setup a gitbuilder repository, using autobuild-ceph. Asking a developer is inconvenient because it takes time and also because it creates packages for every supported operating system, even when only one of them would be enough. In addition there often is a long wait queue because the gitbuilder of the sepia lab is very busy. Setting up a gitbuilder repository reduces wait time but it has proven to be too time and resources consuming for most contributors.

The buildpackages task can be used to resolve that problem and create the packages required for a particular job on demand. When added to a job that has an install task, it will:

When the install task looks for packages, it uses the http server populated by the buildpackages task. The teuthology cluster keeps track of which packages were built for which architecture (via makefile timestamp files). When another job needs the same packages, the buildpackages task will notice they already have been built and uploaded to the http server and do nothing.

A test suite verifies the buildpackages task works as expected and can be run with:

The –ceph-git-url is the repository from which the branch specified with –ceph is cloned. It defaults to http://github.com/ceph/ceph which requires write access to the official Ceph repository.

The instructions to install GitLab CI runner are adapted to Ubuntu 14.04 to connect to GitLab CI and run jobs when a commit is pushed to a branch.

A runner token must be obtained from GitLab CI, at the http://cong.dachary.org:8080/projects/1/runners URL for instance.

The gitlab-ci-multi-runner/ is installed as follows:

It is configured to run each job in a golang docker container. The project git repository is expected to have a .gitlab-ci.yml file at the root. For instance if .gitlab-ci.yml was:

the GitLab runner would succeed with: