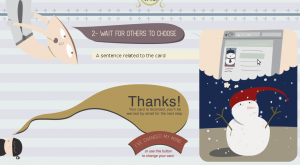 Once a player picked a card or decided to vote for a card, a new step is introduced to make it clear that he should wait for the other players to act ( see the mockups for invitation and vote states).
Displaying this state does not require an interaction with the game server, it is done client side only. The wait invitation state was implemented first ( and linked to a ticket ) and the wait vote state was implemented afterward (it includes some factorization of the wait invitation state).
In both cases the modification involves a change in the client logic that is encapsulated in the vote_voter_wait function, called when a player already chose a card (either for vote or for picking a card as shown below). This accommodates for when a player just picked a card and stays in the same page, triggering only client logic, or when the player displays the game state from scratch using a permalink.

The function itself sets a few classes for display purpose and activate an action that allows the player to go back and change her/his mind.

The new function is tested to validate is functionalities, using a minimal HTML markup.
After validating this functional change, a new skin page is created to display the wait state of the invitation ( or the vote ). A new HTML element is created together with a few CSS stanzas associating it with images sliced from the mockup.

The skin gallery was moved inside the cardstories element and positioned in absolute with a z-index that is larger than any other to ensure that it will always show. Otherwise it may be hidden behind elements such as the hanging man in the wait state.

The order of the skin links have be re-ordered to better match the workflow of the game and make it easier to check all of them.

A link to the list of games was added to the top of each page It only requires modifications to HTML and CSS. 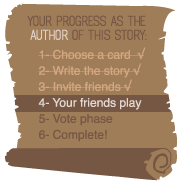 The complete state was the same from the author point of view or the player point of view. It has been changed set a class to its outer element that allows to differentiate the CSS. It is set to cardstories_owner or cardstories_player.